Biosecurity is a management process, forming part of an animal farm HACCP process to maintain an environment that reduces pathogens to a safe level and prevent the spread of unwanted organisms vectored from place to place. Disinfection has a crucial role in biosecurity. It control and prevents highly transferring livestock pathogens during outbreaks. However, several times organic matter can form films that would protect organisms against the disinfectant’s germicidal action.

Likewise, some disinfectant solutions are only active for a few days after mixing or preparing. Failure to make a fresh solution of disinfectant after it has been prepared longer than a few days or after it has become visibly contaminated by organic material like manure may result in using a product that won’t work. Even worse, it may give a false sense of security.

Sufficient concentration and contact time can overcome some of these problems with certain classes of disinfectants, but often increasing the concentration or contact time makes the use of the product impractical, costly or caustic. Phenols, though, are broad-spectrum disinfectants and maintain their activity in the presence of organic material which makes them useful in livestock operations.

Phenols are among the oldest established active disinfectant substances. Originally derived from coal tar, they were extensively used in the early 20th century and still play a major role in the disinfectant armoury today. In the United Kingdom and Ireland, over 30% of disinfectants used in veterinary applications are based on phenols.

Phenols (cresols, xylenols and ethylphenols) have a wide spectrum of activity against bacteria, viruses, fungi and mycobacteria. ‘Black fluid’ phenols are based on a tar fraction of higher boiling-point than that is used for the white fluids. It’s effective against a wide range of Gramnegative and Gram-positive bacteria. However, their level of fungicidal activity is quite high. Black fluid phenol products are effective in conditions of heavy soiling. They form white emulsions when diluted and have a tarry odour. By formulating tar acids in combination with sulphonic acids and acetic acid, highly bactericidal, fungicidal and virucidal products have been formulated for farm use.

Zagro Farm Liquid is a synergistic mixture of natural phenol and organic acids that has a broad-spectrum action against viruses, bacteria, fungi and spores at low temperatures and even in high organic challenge. It’s a specially-developed heavy-duty disinfectant for use with all classes of livestock. It’s ideal for high ORGANIC challenge environments, farm disinfection of buildings, pathways, including foot dips & wheel dips, as part of a continuous biosecurity program.

Zagro Farm Liquid formulations have also been developed using dodecyl benzene sulphonic acid as an emulsifier. It is less toxic and less corrosive than most other phenols. Formulating with phenols requires great care, as the activity of the formulation relies on both oil/water partition and micelle concentration. Zagro Farm Liquid’s powerful formulation effectively denatures proteins and interferes with the synthesis of DNA and RNA in the cell and causing cell lysis. 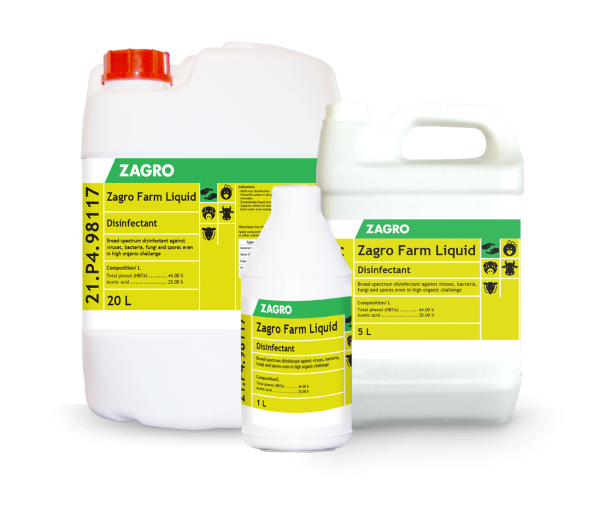