On August 12, 2021, the National Development and Reform Commission issued The Barometer of Target Achievement. In which the reduction of energy intensity, Ningxia, Qinghai, Ningxia, Guangxi, Guangdong, Fujian, Xinjiang, Yunnan, Shaanxi, Jiangsu 9 provinces (autonomous District) the energy consumption intensity has risen instead of falling in the first half of 2021. 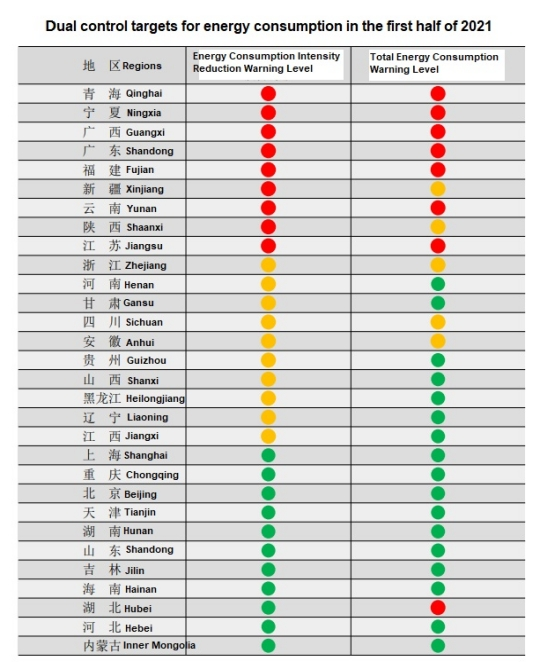 Will the vitamins be affected by the power problem?

We can learn from the chart above that most of the vitamin industry is located in Zhejiang, Jiangsu, Shandong, Jiangxi and other places.

However, it is another 35 kinds of chemicals that have been affected rather than vitamins. They are including pesticides, potassium chloride, yellow phosphors, phosphorus trichloride, glyphosate, titanium dioxide, phosphorus, fluorine, caustic soda, lithium hexafluorophosphate, phosphoric acid, Silicone, trichloroethylene, etc.

Relatively speaking, due to the scale of electricity consumption, power and coal restrictions have little impact. In recent years, the overall supply of the vitamin market has exceeded demand. As far as the current situation is concerned, the fundamentals of this market have not fundamentally changed.

Will the amino acids be affected by the power problem?

What cause this chaotic market?

In the past 10 days, different market influencing factors have continued to produce and ferment. Whether it is the amino acid market or the vitamin market, it can be said to be chaotic. The main theme is price increases. Both manufacturers and buyers have begun to lose sight of this market. More essence and truth behind it. Electricity curtailment, coal restrictions, and coal prices have risen sharply. This should be the black swan of this chaos.

On October 10, the PPI Thermal Coal Commodity Index was 237.95, a record high in the cycle. It was an increase of 432% from the lowest point of 45 on January 20, 2016, and an increase of 99.0% from July (Data source: Business News). In addition to the real impact of this wave of bulk raw material growth on the growth of vitamin and amino acid production costs, the impact on the psychology of the market masses has also been multiplied.

The direct impact on amino acids and vitamins is the increase in power costs. Taking the average consumption of 2 tons of thermal coal per ton of fermented amino acid as an example, the power cost per ton of product has increased by 400-600 yuan/ton.

Therefore, the impact of "dual control", "power curtailment" and coal price hikes on the amino acid and vitamin industries will continue, but the impact may not be as great as everyone's sudden feelings.

Based on the information obtained from different channels, this wave of dual control policies, electricity and coal restrictions, and coal price increases are expected to last until the first half of 2022.