Mastitis is the inflammation of the mammary gland and udder tissue, and is a major endemic disease in dairy cattle. It usually occurs as an immune response to bacterial invasion of the teat canal by variety of bacterial sources present on the farm, and can also occur as a result of chemical, mechanical, or thermal injury to the cow’s udder. The infectious pathogens commonly associated with mastitis are Staphylococcus aureus, Streptococcus spp., gram-negative bacilli such as Escherichia coli, Salmonella spp., and mycobacteria. Fungi such as Candida and Cryptococcus have been identified in rare instances as well.

Moderate to severe clinical cases can be very painful and unpleasant to the cow. The most obvious symptoms of clinical mastitis are abnormalities in the udder such as swelling, heat, hardness, redness and pain. On the other hand, the milk can be observed as watery in appearance, with flakes, clots and pus.

Mastitis is a very complex disease and is affected by a variety of factors.  It can be present in a herd subclinically, where few, if any, symptoms are present in most cows. Practices such as close attention to milking hygiene, the culling of chronically-infected cows, good housing management and effective dairy cattle nutrition to promote good cow health are essential controlling herd mastitis levels. Mastitis is most often transmitted by contact with the milking machine, and through contaminated hands or other materials, in housing, bedding and other equipment.

Chlorhexidine is a broad spectrum antimicrobial, effective against both Gram-positive and, to a slighter lesser degree, Gram-negative bacterium. Effective against E. coli , S. Aureus, Bacillus subtilis, Psuedomonas aerugenosa, and C. Albicans (Allen, 1994). The antimicrobial activity of chlorhexidine is primarily against bacteria, with variable effect against viruses and fungi. Chlorhexidine is adsorbed onto the surface of bacterial cells leading to rapid coagulation inside the cell and cell death. Chlorhexidine remains active 5-6 hours longer than any other teat dip preparation. It is also an effective antibacterial substance in the presence of blood and other organic materials. The optimum pH range for chlorhexidine is 5.0-8.0 (Denton 2001).Emollients are often used in conjunction with chlorhexidine to enhance teat health.

An emollient (such as glycerine) is a compound used to soften or condition teat skin. The addition of emollients to teat disinfectant can improve teat skin health and so reduce the likely reservoir of mastitis pathogens in teat sores and cracks. Many teat disinfectants contain emollients when they are sold, especially those formulated with relatively low pH where skin irritation would be expected without some additional protectant. 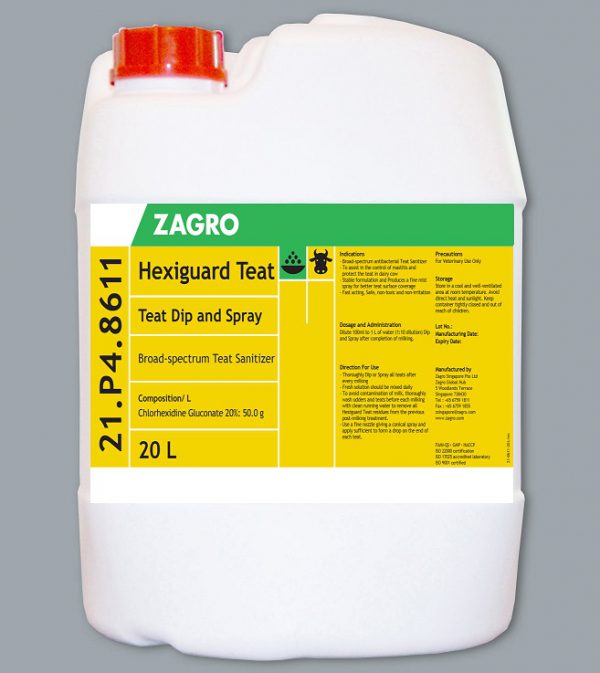