Deficiency of Vitamins : Diseases and Reduced Performance in Animals

Fat Soluble Vitamins in Animal Nutrition
Vitamins are complex organic compounds. These are essential compounds as they maintain normal physiological functions such as growth and development, life functions, health and reproduction. Most animals however, are not capable of synthesizing vitamins at all or cannot produce sufficient quantities for their own requirement.

The vitamin needs of animals depend greatly on their physiological makeup, age, health and nutritional status and function, such as producing meat, milk, eggs, hair or wool or developing a fetus. For example, cows producing greater volumes of milk have higher vitamin requirements. Breeder hens on the other hand have higher vitamin requirements for optimum hatchability tha table egg laying hens, since vitamin requirements for egg production are generally less than those for egg hatchability. For fat soluble vitamins, higher levels are needed in breeder hen diets than in feeds for rapidly growing broilers.

The vitamins A, D and E belong to the fat-soluble vitamins. These vitamins are very critical most specifically in breeding animals. Deficiency of these vitamins or insufficient absorption will produce deficiency symptoms resulting in specific diseases and reduced performance.

Vitamin A is necessary for support of growth, health, and life of higher animals. Vitamin A deficiency causes at least four different and probably physiologically distinct lesions : loss of vision due to a failure of rhodopsin formation in the retina; defects in bone growth; defects in reproduction; and defects in growth and differentiation of epithelial tissues, frequently resulting in keratinization. In most livestock, the absence of vitamin A in the ration will dramatically reduce reproductive ability. Hatchability is significantly reduced as well when hens are fed a vitamin A-deficient ration. The reproductive problems associated with vitamin A deficiency are actually the result of failure to maintain healthy epithelium.

The general function of vitamin D is to elevate plasma Ca and P to a level that will support normal mineralization of bone as well as other body functions. The outstanding disease of vitamin D deficiency is rickets, generally characterized by a decreased concentration of Ca and P in the organic matrices of cartilage and bone. Vitamin D plays a critical role in the body’s use of calcium and phosphorous. It works by increasing the amount of calcium absorbed from the small intestine, helping to form and maintain bones. Vitamin D benefits the body by playing a role in immunity and controlling cell growth. Young animal especially need adequate amounts of vitamin D to develop strong bones.

Vitamin E deficiency causes disorders of the cellular membrane, due to the oxidative degradation of polyunsaturated fatty acids. The symptoms are specific to each animal species. Vitamin E deficiency generally causes liver necrosis and is the reason for species-specific disorders such as exudative diathesis (abnormal permeability of the capillary walls) and encephalomalacia (crazy chick syndrome) in poultry, Mulberry heart disease, which results in sudden heart failure of pigs and muscular dystrophy (white muscle disease), particularly in ruminants. Sub-clinical vitamin E deficiency is hardly detectable but results in retarded growth and impaired feed conversion as well as lower fertility, higher susceptibility to infectious diseases and reduced stress resistance. Vitamin E has been shown to be essential for integrity and optimum function of the reproductive, muscular, circulatory, nervous, and immune systems.

Vitamin A, D, and E are supplemented via drinking water in animals. This is because the general intake from feed is not sufficient for meeting the requirement of the animals. Additional supplementation is also needed in times of increased vitamin demand. AD3E is especially indicated for high performing animals to improve the reproductive and immune response especially during stress situations.

Zagrosol AD3E is a highly stabilized formulation of fat-soluble vitamins A, D3 and E. It is produced by micro emulsion technology which is a clear solution, thermodynamically stable and is an isotropic liquid mixtures of oil, water and surfactant, frequently in combination with a co-surfactant. Zagrosol AD3E effectively improves the availability of these nutrients especially during the time of stress, reproductive and disease. Zagrosol AD3E provides the convenience of use for the farmers and promotes high absorbability of nutrients for the animals. 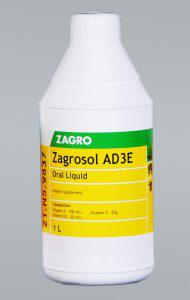