With the European ban on the use of antibiotic growth promoters (AGPs) since 2006, scientific advancements have led to the growing use of alternatives like Acidifier. Simply put it this way, the application of dinking water supplement of acidifier such as organic acid not only can be used to replace those antibiotics & AGPs, but they have also been proven to be safe and have the similar positive impacts on the farm animals’ overall nutritional health, if not better than AGPs. Moreover, Acidifier, apart from its abilities to lower the pH values in animal gut, can cross cell membranes of pathogenic bacteria where they will dissociate and disrupt the metabolism in them, thus stunting the growth of the pathogenic bacteria from multiplying.

One of the main functions of acidifier is its antimicrobial effects, and the magnitudes of such effects are largely dependent on the chemical properties of individual acids or acid salt that act as dietary form of antimicrobials used for improving the animal drinking water qualities.

Third, and it is somewhat related to the second point on reducing acidity levels in the farm animals’ guts, and that is the lowering of pathogen counts in the intestinal tracts. As acidity levels are being brought down through the application of acidifier, the occurrence of digestive disorders will thus be reduced.

While Zagro does not guarantee any foolproof solutions that help to reduce the acidity levels in the animal gut to desired level, we have reliable and safe acidifier products like our Zacid Liquid Plus which comes in a liquid blend of organic acids, namely formic, propionic, lactic and citric acids that provides all-rounded actions for total gut acidification, stabilizes the intestinal microflora, and reduces bacteria load in drinking water. The use of Zacid Liquid Plus in the water systems helps in removing the bio-film while also reduces water and stomach acidity by inhibiting the growth of common pathogens, thus enhancing the digestion by increasing the enzymatic activities in the gastric systems.

Moreover, Zacid Liquid Plus also acts a supplement as it is being applied into drinking water for the purposes of maintaining good hygiene, reduces water and stomach pH, thus minimizing the occurrence of pathogenic bacteria outbreaks like Salmonella, E.oil, Campylobacter, and Clostridium. This enables better digestion as evidenced by the improvement of digestion through the increase in the ability of gastric enzymes. 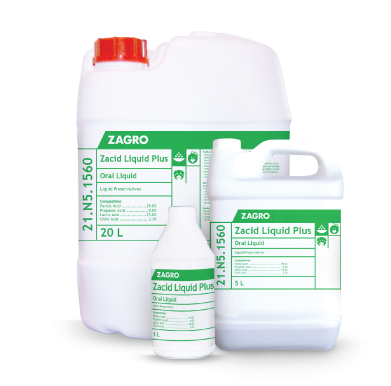