Poultry seems to be particularly sensitive to temperature-associated environmental challenges, especially heat stress. It has been suggested that modern poultry genotypes produce more body heat, due to their greater metabolic activity. Heat stress is a limiting factor affecting the profitability of the monogastric animal industry in countries with hot climates. The adverse effects of heat stress include reduced growth rates, impaired feed efficiencies, and higher mortality, leading to economic losses.

Exposure to high ambient temperature is associated with important problems that adversely affect the performance of animals:

In Swine, when heat stress occurs, thermoregulatory mechanisms are activated. These mechanisms consist of behavioural and metabolic changes that reduce body heat load in an effort to maintain a normal body temperature. Common responses to heat stress in swine include decreased feed intake, increased respiration rate, and increased water consumption (loss of electrolytes). Pigs’ average daily gain (ADG) is reduced and the feed conversion ratio (FCR) is increased. Animals experiencing heat stress redirect blood flow from the body core to the periphery to facilitate dissipation of body heat to the environment. The increased blood flow to the skin is counter-balanced by reduced blood flow to the gut and other body organs (liver, spleen, pancreas, and mammary glands).

One of these major afflictions is an increase in the permeability of the tight junction in the gut. Increased tight junction permeability allows endotoxins commonly found in the gut to enter the blood stream. When pigs are exposed to heat stress their intestinal defence systems are significantly compromised; this, in turn, provides opportunity for   infection as pathogenic bacteria can invade the body more easily. Therefore, heat stress can create secondary infection if sanitary conditions are poor resulting in the initiation of a systemic inflammatory response.

Betaine helps to maintain cell volume and increases intracellular water retention as it is considered a non-ionic osmolyte (unlike Na+ and K+), this allows it to accumulate in cells without disrupting normal functions. This function plays a key role especially when animals are under heat stress conditions, helping the animals to restore their acid-base balance and as consequence, Betaine increases the breast meat yields in the carcass of broilers caused among others by the high water holding capacity of the muscles. During heat stress more Betaine will be formed from Choline in order to minimise its effects.

Two Betaine sources are on the market nowadays. The most common one is the Betaine anhydrous extracted from sugar-beet molasses (a by-product of sugar industry) but more recently also synthetic Betaine hydrochloride is available. According to the literature, both sources have equal nutritional properties (University of Ghent, 2010; unpublished).

During periods of heat stress, electrolytes (sodium, Potassium and chloride) can be added to the drinking water to replace those that are lost and to stimulate water consumption. Supplementation of Betain (osmolyte) and electrolytes helps in maintaining water balance in the body cells against extra cellular osmotic gradients. Sorbitol is Osmolytes and hepatoprotective agents, Fructooligosaccharides (FOS) improve the beneficial micro flora and promote the gut activity during heat stress and glycerin is acceptable source of energy for poultry. Glycerin also plays a critical role in body cellular metabolism. Supplement of glycerine might help heat stressed birds maintain thermal balance by providing the energy needed by panting and Replace lost fluids, hydrating muscle tissues to reduce fatigue and enhance performance. Menthol maintains the Sensation of freshness for improves the animal water intake. 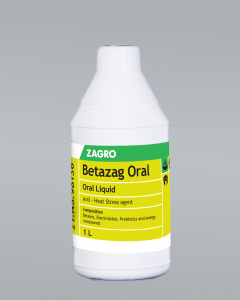 It helps the animals combat the effects of heat stress due to high ambient temperatures and a high relative humidity. Betazag Oral is an osmotic stress reducing agent that ensures strong osmoprotection for birds during heat stress conditions.