Housefly – Its Problem And Control Measure

It is a fact that the common housefly, which is also known as Musca Domestica, can pose a serious health problem and nuisance to human as well as to livestock and animals. It carries diseases which can cause a detrimental impact on public health, livestock and animal production.

In livestock and animal production, large number of housefly can significantly reduce meat, egg and milk production resulting in substantial economic losses for the farmers because it transmits diseases to the poultry and animals as it carries bacteria, viruses and protozoa.

HOW CAN WE CONTROL THE HOUSEFLY

Firstly, we need to know its biology and life-cycle.

Secondly, it can be controlled by the following methods:-

Chemical control using safe and effective insecticides like Azamethiphos is still the most effective method in farm fly control especially during the fly season where flies are plentiful.

Azamethiphos is an organo phosphorous compound chemical. It has been used to control housefly and other household insects and storage pests for many years without any known resistant problem so far.

Zagro has a good range of Azamethiphos products as follows:-

Zazafly contains 1% Azamethiphos and an attractant called pheromone to attract the housefly. It is an easy and ready-to-use scatterbait for effective control of the housefly in livestock production facilities, garbage areas, restaurants, institutions and private household. 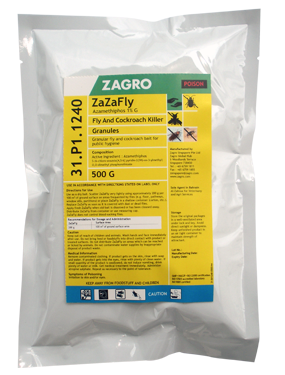 Zazacron contains 10% Azamethiphos and also the pheromone attractant to attract the housefly, similar to Zazafly. However, it is used as a paint-on or spray on surfaces where the housefly like to congregate. 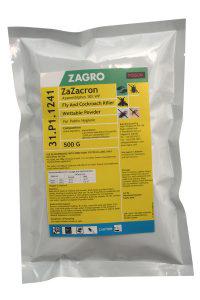