Enteric diseases (ED) are of major economic concern in the animal industry worldwide. These have resulted in decreased productivity and increased mortality. It also caused contamination of animal products which lead to food safety concerns. Enteric bacterial infections in poultry pose a threat to intestinal health and can contribute to poor feed efficiency and livability of a flock. Various enteric bacterial diseases are recognized in poultry and swine. In poultry, necrotic enteritis, ulcerative enteritis, and avian spirochetosis primarily infect the intestine. In swine, the clinical signs include diarrhea, reduced growth rate, weight loss, and death of pre-weaned, weanling, grower-finisher, young and adult age breeding animals; and huddling, litter ingestion, diarrhea, poor production and high FCR, uneven flocks and death in poultry. The enteric pathogens are known to be the common root cause of food-borne diseases in humans. Enteric diseases are the most important concern in the animal industry because of its negative impact on the performance and overall health of the animal.

Enteric bacteria attached to the lining of the intestine, produce toxins and impair the body to absorb fluids or nutrients. The proliferation of bacterial causes damage to the epithelial layer which leads to fluid and nutrient loss.

The increased use of antibiotics has been the issue surrounding the development of resistant pathogenic bacterial strains and residual contamination of the food chain. This has led to the adoption of safety measures and a gradual withdrawal of antibiotic promoters (AGP) from animal diets on which the use of antibiotics as growth promoters has been banned in many countries. With this, intensive researches focusing on the development of alternatives to antibiotic growth promoters have been conducted to solve the problem. At present, studies showed that probiotics and prebiotics alleviate the occurrence of enteric disease without the use of AGP’s by enhancing the gastrointestinal tract of the animals.

Probiotics and prebiotics are used to enhance gut microflora of an animal thus, strengthening the gastrointestinal tract. To differentiate the two, Probiotics are live bacteria beneficial to the animals while Prebiotics are carbohydrates that cannot be digested by the human body but serve as food for the Probiotic. Prebiotic helps probiotic works efficiently thereby, making both works in tandem to make sure that the gut has healthy, beneficial bacteria it needs. Synbiotic supplements are supplements that contain both Prebiotic and Probiotic.

Probiotics as dietary supplements can help boost the performance of the animals mainly by altering the gastrointestinal microflora. It enhances the growth of non-pathogenic bacteria thereby outgrowing the number of pathogenic or harmful bacteria which leads to suppressing the growth of intestinal pathogen adhering to the villi in the small intestine thus, allowing more efficient absorption and utilization of nutrients by the animal.

With a healthy gastrointestinal tract, digestive disorders can be avoided. Synbiotic supplements which are effective in controlling the presence of pathogenic bacteria such as enteric pathogens are then highly recommended to be used in the animal’s diet to inhibit the occurrence of ED, consequently the development of resistant bacteria due to AGP’s.

Zagro introduces the product called GUT BIO, which is a synbiotic supplement composed of multi-species of stable Probiotics and Prebiotics compounds such as fructooligosaccharides (FOS) and manno oligosaccharides (MOS). It effectively prevents and treats enteric diseases and promotes better gut health.

There are four main special features in GUTBIO Products:- 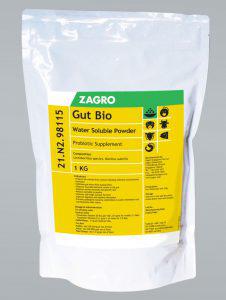