Fungal growth in feed can decrease its quality substantially. As the molds thrive in feed, it can consume majority of fat, protein, carbohydrate and even mineral elements, leading subsequently to stuff discolorations, heating, mustiness and biochemical transformations, yielding to the accumulation of toxic substances in most cases. The presence of growing molds produce mycotoxins in feedstuff and decreases feed intake, and feed efficiency, while increasing the risk of infection and reproduction disability.

Mold growth can occur in the field as well as during processing and storage of harvested products and feed (spoilage). To prevent this from happening, knowledge on the growth conditions of the molds and the control measures is needed. Excess moisture is considered to be the most critical factor contributing to mold growth. Grains stored at high relative humidity readily absorb excess moisture from the air. Temperature also has a direct effect on the rate of mold growth and mycotoxin formation. It has been generalized that the higher the temperature, the greater the rate of growth and the higher the level of mycotoxins produced. This assumption may appear to be correct for certain species of mold, such as Aspergillus. The optimum temperature for Aspergillus growth and aflatoxin production is reported to be 24 – 35°C.

Moldy feeds are less palatable and may reduce dry matter intake. This in turn leads to a reduction of nutrient intake, reducing weight gains or milk production. Performance losses of 5 – 10% are typical with moldy feeds even in the absence of mycotoxins. Moldy feed may also have reduced digestibility and energy content. Molds grow and propagate, deriving energy from the feed’s protein, fat and carbohydrate. Dietary fat in particular is reduced in mold infected feeds.

An effective choice to control molds is the use of feed additives. The common preservative available in the market is calcium propionate or propionic acid which acts as fungicide and bactericide on stored grains, hay, storage areas for silage and grains, poultry litter, and drinking water for poultry and livestock. Propionic acid is permitted in animal feed and human foods primarily as a mold inhibitor. It tends to be highly specific against molds, with the inhibitory action being primarily fungistatic rather than fungicidal.

Zacid MI, a product of Zagro is a powerful mold inhibitor containing calcium propionate salt  which is used for feed preservation preventing growth of molds and feed spoilage.

Among the advantages of using Zacid MI are: 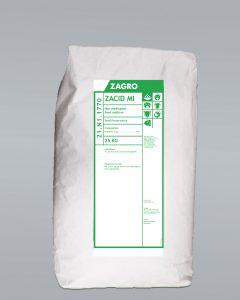