Internal and external parasites are one of the major problems in poultry production that affects productivity and profitability. Specifically, the internal parasites affect the gastrointestinal tract by damaging and irritating the stomach and intestinal lining or mucosa. This results in decreased digestion and absorption of nutrients in these areas as well as protein and blood loss.

Zagro with its aim to provide agrisolution to farmers developed Zagromec Oral – a medicated liquid preparation containing broad spectrum antiparasitic agent known as Ivermectin. Ivermectin is a mixture of avermectin H2B1a (90%) and avermectin H2B1b (10%), which are obtained directly from fermentation extracts of Streptomyces avermitilis. Ivermectin acts as agonist of the GABA (gamma-aminobutyric acid) neurotransmitter in nerve cells and also binds to glutamate-gated chloride channels in nerve and muscle cells of invertebrates. In both cases it blocks the transmission of neuronal signals of the parasites, which leads them paralyzed, starved or expelled out of the body. It also affects the reproduction of some parasites by diminishing oviposition or inducing an abnormal oogenesis. Ivermectin has been proven effective against internal parasites such as nematodes, Capillaria spp. and Ascaridia spp. and external parasites like mite and lice infestations. 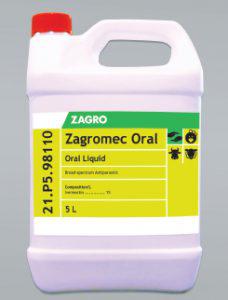 Zagromec Oral having a stable ivermectin liquid formulation is considered as highly effective treatment via drinking water against internal and external parasites infestations.