Managing Immunosuppression and Building an Efficient Immune Foundation in Animals

Vitamin E plays an important role in various biochemical and physiological processes, including antioxidation (Franchini et al. 1995). In nutritional and physiological research, vitamin E supplementation has been proven to improve growth performance, enhance immunity (Gatlin, 2002) and restore impaired immunity (Sheehy et al., 1997). Selenium as an essential trace mineral, functions as an integral component of glutathione peroxidase (Rotruck et al., 1973). Vitamin E is a primary biological antioxidant preferentially retained in cellular membrane and provides the first line of defense against oxidative damage. A combination of selenium and vitamin E has been shown to play a major role in the development and maintenance of defense systems (Marsh et al., 1981).

Vitamin E and selenium both have immunostimulatory effects in a variety of species when administered in quantities in excess of established dietary requirements. Deficiencies of vitamin E and selenium conversely caused suppression of the immune response system, particularly, cell-mediated mechanisms. Inclusion in the diet above requirement is associated with variable improvements in animal performance and immune function. At the cellular and molecular level, research in the last decade has produced a clearer understanding of the mechanisms underlying the multiple functions of vitamin E and Se and it is apparent that these functions extend beyond antioxidant protection.

Zagro is always committed to offer high-quality products. Zagrosol ES is a liquid Vitamin E and Selenium supplement administered via the drinking water for livestock animals. Vitamin E and Selenium are important biological antioxidants which complement each other in boosting the animal’s immune system and minimizing stress in livestock production. 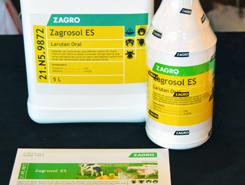