Antibiotics work against bacteria and different classes of antibiotics have distinct targeting spectrums and potencies. These antibiotics have long been used in the animal industry for therapeutic purposes. Certain antibiotics have also been and continue to be used for treating subclinical diseases and successful intervention can indirectly improve animal growth and feed efficiency. However, the antibiotic usage in food animals is contributing to the global problem of antibiotic-resistant bacteria across human and animal populations. These concerns have led to calls to significantly reduce or stop the use of antibiotics in animals that are also used in human medicine, particularly in cases where they are used at sub-therapeutic levels to promote growth. Legislative bans on growth-promoting antibiotics have been passed in different parts of the world, such as the European Union, while other regulatory actions, such as the revised Veterinary Feed Directive in the United States, are encouraging more judicious use of human medically relevant, therapeutic antibiotics in food animal production, including halting sub-therapeutic usage of such antibiotics. Concerns and legislative actions around antibiotic use in food animals are leading to an increase in the search for tools to counter pathogens.

Organic acids (OAs) are known to attribute to various factors, including, reducing the buffering capacity of diets, controlling harmful microorganisms in digestive and respiratory organs by reducing pH levels in the stomach and gut, promoting the availability of nutrients in the diet and their absorption and digestion, and improving immune responses in monogastric animals which can make a great contribution to the profitability in the animal production and also can provide people with healthy and nutritious animal products. Medium-chain fatty acids (MCFA) defined as saturated fatty acids with C6 to C12 hydrocarbon chains are another type of acids that could be considered as antibiotic replacers. MCFAs have strong antibacterial activity against Gram-positive bacteria such as C. perfringens and Escherichia coli. In addition, OAs can even further improve the antibacterial effects of MCFAs (Zentek et al., 2011). A recent study showed immune enhancer medium-chain fatty acids (MCFAs) blend with organic acid, especially saturated MCFAs with 6–12 carbon-long chains, have demonstrated positive benefits as feed additives by improving animal health, production, and feed digestibility. The combination of OAs and MCFAs has been reported to have beneficial effects on intestinal microecology in piglets (Zentek et al., 2013; Kuang et al., 2015) and nutrient digestibility in laying hens (Lee et al., 2015). 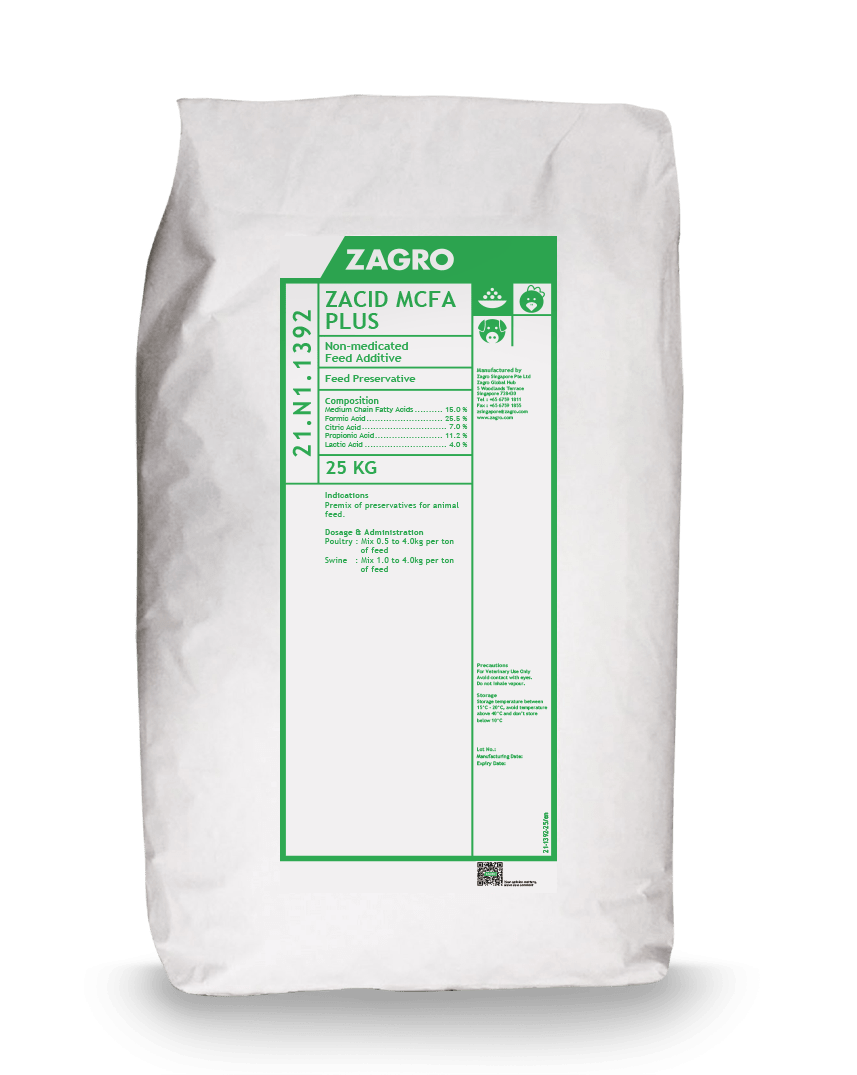