In the past, antibiotics and other medicinal products had been broadly used, mainly in order to modify the alimentary microbiota and to boost productivity and animal growth. Unfortunately, long-term use of those substances has led to the development of drug-resistant microorganisms, posing a threat to consumers’ health and exerting negative effect on the environment.

As a result, the use of antibiotic-based growth stimulators was banned in the European Union on January 2006. Due to this, alternative substances ensuring similar effects have been sought.

Synbiotic is a mixture of probiotics and prebiotics that beneficially affects the animal by improving the survival and activity of beneficial microorganisms in the gut. Synbiotic can also increase the digestibility and availability of many nutrient elements such as, vitamins, mineral elements and proteins. The synbiotic concept is about the mechanism of action altering the composition of intestinal microbiota by viable benefit organism and non-absorbable organism.

The gastrointestinal tract has a compound community of microbiota that provides benefits to its host in numerous different ways, including drug metabolism, nutrient production, and protection against pathogens, detoxification and regulation of the immune system. Animal studies have demonstrated that changes in these gut microbial communities can cause immune dysregulation, improve growth and influence on performance; and there are information that support the use of probiotic and prebiotic and much more on Synbiotic.

Bacillus subtilis, a gram-positive probiotic strain of bacterium, which is a direct-fed microbe, has the ability to produce endospores. Most known probiotics are not capable of producing these endospores.

Bacillus subtilis can form spores in adverse environment that has some unique biological characters such as resistance to acid, alkali, and heat. They also grow fast, thus, the spores can still plant in the intestinal tracts to grow and breed even if it is exposed to strong acidic environment in animals’ stomach.

Several studies have also shown the ability of Bacillus subtilis to reduce the colonization of certain important pathogenic bacteria to the animal industry including Salmonella enterica and Clostridium perfringens. The spores of Bacillus subtilis are capable of initiating an innate immune response, providing the host with the ability to fight bacterial infection.

B. subtilis is an aerobic bacterium. It takes a large amount of free oxygen while reproducing in the intestinal tract thus, it can strongly restrain the growth of the majority of aerobic pathogen bacteria, and enhance the growth of anaerobic probiotics such as Lactobacillus, yeast and Bifidobacterium (Wang et al., 2006). This is useful to restore and maintain the intestinal flora balance of the animal, improve immune function, enhance animals’ resistance to disease, and promote their growth.

Prebiotics are non digestible short-chain carbohydrates that beneficially affect the health of the animal by selectively stimulating the growth and/or activity of some groups of beneficial bacteria in the colon. Among prebiotics, mannanoligosacharides (MOS) from yeast Saccharomyces cerevisiae and fructooligosaccharides have been widely researched and applied in animal nutrition

Zagro’s newly developed Product called Synbio is a new generation of feed additive with combination of the above mentioned Bacillus subtilis strain and valuable prebiotics to improve the gut health and overall performance of animals. 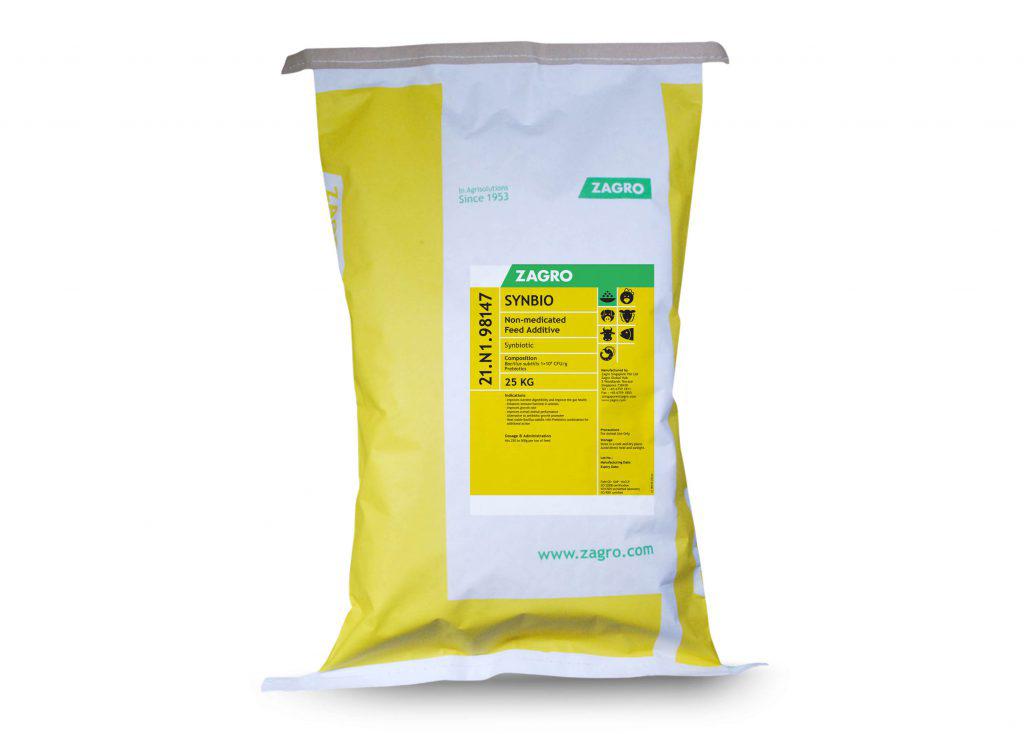