The use of antibiotic growth promoters (AGP) to enhance the efficiency of agricultural animals has been practiced for over 50 years. The types of antibiotics used as growth promoters include tetracyclines, penicillins, sulfonamides, and aminoglycosides, and all of these compounds have been shown to increase efficiency, weight gain and survival. There is no doubt that dietary antibiotics have played a fundamental role in animal production as growth and health promoter. However, the current trend is to look for alternatives to antibiotics for in-feed use because of public concerns with regards to their residues and subsequent occurrence of antibiotic-resistant bacteria. Many authors have extensively reviewed and compared various compounds that have been considered as alternatives to antibiotics in animal production. The usage of antibiotics in animal nutrition is strongly debated upon. When antibiotics are added to animal feed for prolonged periods of time, populations of pathogenic bacterial flora develop resistance to that antibiotic and can become dominant in the gut. The long-term result is that the animal will become less and less responsive to the antibiotic, causing the improvement in animal performance to stagnate. In Europe, antibiotics are no longer allowed but in other countries like the USA, they are still being used.

As an alternative to AGP, there are currently plenty of “all natural” products emerging on the market that have the potential to increase animal efficiency. These products include probiotics, prebiotics, trace minerals, enzymes and herbs and spices (essential oils). Essential oils are compounds that give plants and spices their colour and scent. Many essential oils have antifungal, antioxidant, and antibacterial properties that are used for protection of the plants they originate from. Essential oils have proven to be good alternatives and reduce antibiotic resistance in monogastric animals. The antibacterial properties of many essential oils present in clove, garlic, oregano, cinnamon and other plants have been known for years, and these oils have been used to flavour and preserve foods. The essential oils responsible for the antimicrobial activity can be isolated and produced commercially.

Essential oils are already marketed for use in animal production and are claimed to be “digestive enhancers” (Williams and Losa, 2001). Being a very complex mixture of compounds, essential oils’ chemical compositions and concentrations of individual compounds are variable. This diversity of essential oils urged us to select three pure principles, i.e. thymol, cinnamaldehyde, and carvacrol, for evaluating their possible role as alternatives to antibiotics in animal production. Recently, the use of essential oils as feed additives for agricultural animals has become an exciting area of study as a means of improving animal productivity. Laboratory research has shown that certain essential oils, including carvacrol (from oregano) and cinnamaldehyde (from cinnamon), do improve the performance of animals.

Oregano (Origanum vulgare L.) is a species of Origanum (an aromatic herbal product) which, because of its highly potent chemical nature, has been used as a functional herbal product mainly for preserving food quality, inhibiting microbial proliferation on ready-to-cook poultry meat, and more recently, as an alternative growth promoter in swine and poultry nutrition. Carvacrol, thymol, γ-terpinene, and ρ-cymene are the most important components of oregano essential oil involved in the functional properties of oregano. Based on several studies conducted to investigate the influence of oregano products (oil extract or its dried leaf) on broiler performance, researchers have concluded that oregano has the potential to promote broiler performance and reduce bacterial inhabitants of the gastrointestinal tract such as Clostridium perfringens and Escherichia coli. Cinnamon (Cinnamomum cassia) commonly known as “dalchini” is one of the oldest medicinal plants. Cinnamon is known to possess appetite- and digestion- stimulant properties (Tabak et al., 1999). Many essential oils have been isolated from the cinnamon like cinnamic acid, cinnamaldehyde, cinnamate, caryophyllene oxide, eugenol, L-borneol (Tung et al., 2008). Cinnamaldehyde possesses antibacterial properties (Chang et al., 2001) and antioxidant properties (Singh et al., 2007) which suggest the potential usage of cinnamon oil as an alternative to antibiotic growth promoters in broilers. The present study was therefore designed to evaluate the potential of incorporating cinnamon oil at three different levels as a phytobiotic alternative to antibiotic growth promoter in animals.

Accumulation of essential oils in the animal body is unlikely due to their fast metabolic conversion and excretion. However, continuous diets containing essential oils for chickens without withdrawal periods can cause essential oil constituents to be deposited in various tissues. Botsoglou et al. (2002) showed that essential oils can be deposited in a dose-dependent fashion. Hence, their impact on the sensory quality of poultry meat is regarded as minor (Vogt and Rauch, 1991). Essential oils deposited in poultry tissue can also be consumed by humans thereafter. Further studies are needed to examine if the consumption of essential oils in animal meat would evoke any negative effects. It should however be emphasized that the compounds, thymol, carvacrol, cinnamaldehyde are given the ‘GRAS’ status by the Flavor and Extract Manufacturers’ Association (FEMA) and Drug Administration (FDA) (Furia and Bellanca, 1975), (Freeman, 1984), and can be an important factor which implies that their usage is safe.

Zagro most recently introduced Orecim products which are synergistic of Blend of Oreganum vulgare and Cinnamomum cassia mixture – the active content present in both oils can improve animal performance by the prevention of various animal diseases and promoting proper digestion that leads to increase in growth.  Moreover, it has the antioxidant property to improve quality of the meat and eggs. Orecim, the safest and natural growth promoter, is available in both powder and liquid forms for feed and water application. 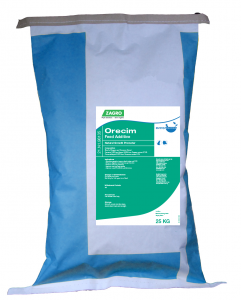