For decades, Organic acids have been used in commercial compound feeds, mostly for feed preservation, and its application to diets for poultry and pigs have been studied extensively.

The main mode of action of organic acids is through their antimicrobial effects, the magnitude of which is dependent on the chemical properties of the individual acid or acid salt. Dietary organic acids act as antimicrobials in the feed and thus improve the feed’s hygienic quality.

Organic acids are capable to reduce pH in feed. It is well known that groups of microorganisms have optimum pH ranges for growth. If the environmental pH is outside this range, their growth is disturbed.

In addition, organic acids have the ability to cross the cell membranes of bacteria. And once inside the cell they will dissociate and disturb metabolism.

Aside from its antimicrobial effects, organic acid can also promote the growth of lactobacilli in the stomach inhibiting colonisation and proliferation of E. coli by blocking adhesion sites. Moreover, in a low pH stomach, pepsin is most active promoting protein digestion and more pancreatic juice is produced wherein digestive enzymes are present, leading to a better digestion of nutrient.

Zacid 6000 is Zagro’s solution to this acidification process. It is a synergistic blend of organic and inorganic acids and their salts including formic, propionic, phosphoric, citric and lactic acid. It promotes feed preservation by mold inhibition, and dietary and gastrointestinal tract acidification thru pH reduction.

Zacid 6000 is formulated with selected and high quality raw materials based on EU standards and manufactured using a special technology called “Citrate Technology” which ensures slow release of acids throughout the entire gastrointestinal tract. It also has a high percentage of acid recovery after heat exposure during feed pelleting process. 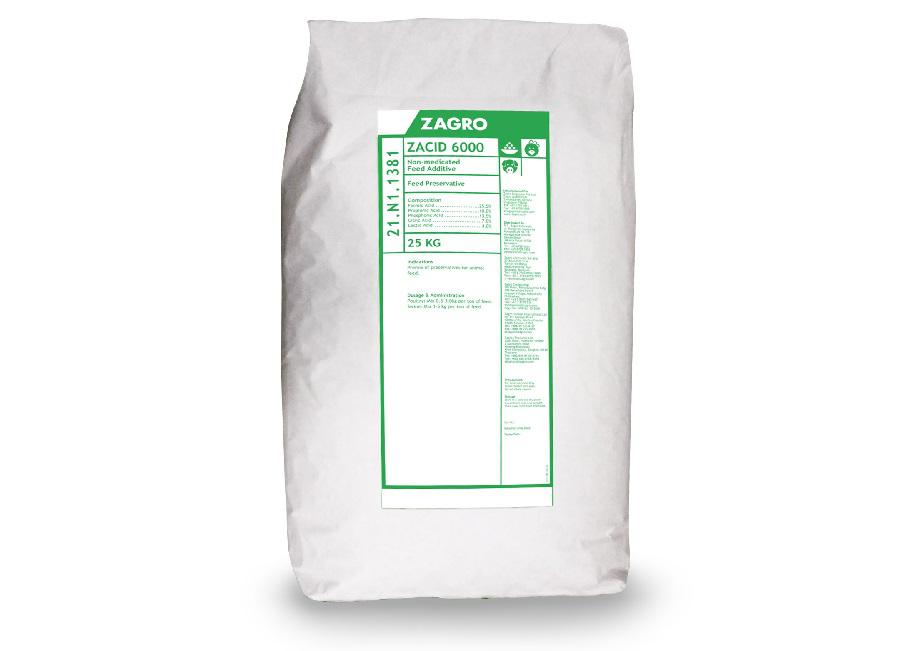