With the advent of modern farming, raising chickens for meat or egg-type purposes became very intensive. This was brought mainly by the development of new hybrids and changes in nutrition, such as high protein feed. Moreover, major issues concerning the modern poultry production system continue to be a problem as chicken manure accumulates. The air can become highly polluted with ammonia from the droppings, which can damage the chickens’ eyes, respiratory system and can cause burns on their legs and feet.

Some poultry farms use carbon-based material to cover the floor, which absorbs excess moisture and minimizes the birds’ contact with their droppings while the decomposition process will somewhat help to mitigate diseases and ammonia. However, this litter material contains uric acid from the birds’ dropping, and upon exposure to moisture, air, and microbial degradation; the uric acid is converted to ammonia that will increase the pH in poultry litter. Litter pH plays an important role in ammonia volatilization.

Ammonia release remains low when litter pH is below 7, but increases to peak levels when litter pH is above 8. This is because the urease enzyme breaks down the uric acid into ammonia. The deleterious effect of ammonia has been observed through field studies at a level of 10ppm, which affects bird’s health and performance. Levels above 25ppm can damage a bird’s respiratory system and allow an infectious agent to become established. E Coli bacteria for example can be significantly increased in the lungs, air sacs, and liver when birds are exposed to ammonia and may result in decreased resistance to respiratory diseases.

To reduce the potential effect of ammonia on bird's health, a necessary control measure needs to be imposed. As such, one of the cost-effective -natural approaches is the use of probiotics to control ammonia production and volatization within the farm.

Zagro’s LitterPro is a combination of different beneficial microorganisms that has a specific function in controlling ammonia gas production within the farm. Proper application of LitterPro through the litter can prevent the detrimental effects of ammonia to both poultry and humans. 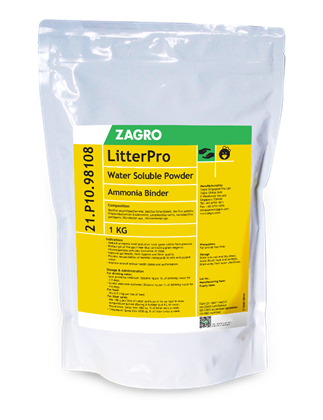