Phytoadditive for Replacement of Synthetic Choline

These essential functions are: As a constituent of phospholipids, i.e. it is essential in the building and maintenance of cell structure, as well as ensuring normal maturation of the cartilage matrix of bone, including the prevention of perosis in broilers. In fat metabolism in the liver, i.e. utilisation and outward transport of fat, so preventing abnormal accumulation of fat within hepatocytes – so-called “fatty liver” as a precursor for acetyl choline synthesis, the transmission agent for impulses along the sympathetic nervous system.

Choline chloride has some disadvantages such as high hygroscopicity, the acceleration of oxidative loss of vitamins in the diet, so that the herbal source of choline can replace the choline chloride in the diets besides producing an improvement in weight gain and feed conversion of birds. It also observed that broilers supplemented with herbal source of choline in the feed showed a reduction of fat in the abdomen and liver. 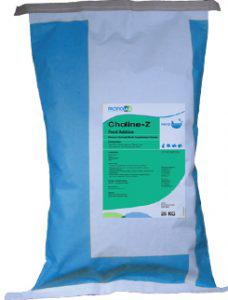 The dietary supplementation of Trigonella foenum-graecum have been reported to increase the performance of broiler chicken. It also contains lecithin and choline that help to dissolve cholesterol and fatty substances. It also contains neurin, biotin, and trimethylamine which tend to stimulate the appetite by their action on the nervous system. Likewise, fenugreek seeds have also been reported to have a hepato-protective impact.Boerhavia diffusa is widely used to rejuvenate liver and detoxify it. It helps in hepatitis and also to stimulate the emptying of the gallbladder and for all types of liver disorders. Dietary supplementation of Trachyspermum ammi (L.) in poultry could improve the performance, blood cholesterol profile and gastrointestinal microbial population in a positive manner. Essential oils of this fruit can inhibit the growth of bacteria associated with gastrointestinal infections such as Escherichia coli and Salmonella typhimurium.Glycine max provides an excellent source of both energy and protein for poultry and swine. Soybeans also contain the isoflavones, which led to an increase in length, weight and leanness body in male fattening pigs and in the feed of laying hens significantly affected egg production, egg weight and feed conversion.