Monogastric animals have extremely complex lung and respiratory systems. Unfortunately, this can lead them to problems affecting their breathing that can be difficult to diagnose and treat. Respiratory distress is one of the fatal and infectious diseases affecting birds. Symptoms of this disease include sneezing, gasping and bronchitis infection, which may lead to sudden death.

Herbal Medicine is a time-honored practice of natural medicine that is older than mankind itself. This practice of using traditional herbal medicine based therapy is nowadays gaining more attention worldwide both in human and animals.

Among the livestock sectors, poultry & swine production systems are the most intensively reared, along with the pressure of increasing demand for poultry & swine products and the threats of emerging pathogens as well. As a result, this sector is badly in need of sustainable therapeutic and production aids especially based on herbs because of the advantages like, low cost, easy availability, no residual effect and free from the threat of antibiotic resistance.

Many herbs have been recorded to be fruitfully used to treat a variety of disease conditions in animals. This article emphasizes on the useful and practical application of the rich heritage of herbal wealth for safeguarding poultry and swine health in terms of chronic respiratory diseases along with immunomodulatory actions for countering immunosuppressive diseases.

It’s useful in treating bronchitis, tuberculosis and other lung and bronchiole disorders. A decoction of the leaves of Vasaka may be used to help with cough and other symptoms of colds. The soothing action helps irritation in the throat and the expectorant will help loosen phlegm deposits in the airway. Essential oils of the leaves also known to contain ketone, terpene, and phenolic ether.

It contains glycyrrhizin (or glycyrrhizic acid) – an anti-microbial & natural sweetner, hepatoprotective, as remedial and nutritious supplement, has anti-inflammatory effect, dissolve and facilitate discharge of mucus in catarrhs as expectorant. It is also used as an herbal remedy for gastritis and upper respiratory tract infections.

Known as peppermint, it contains menthol and exhibits antibacterial, antioxidant and antiviral properties as well as an anti-tussive effect. Menthol, the main chemical component of peppermint, is an effective decongestant and is also an expectorant. Menthol stimulates upper airway cold receptors that causes a reflex inhibition of respiration and inhibits upper airway accessory respiratory muscle activity.

It’s anti-asthmatic effect was attributed to the volatile oils present in the extract. It helps mobilize mucus in bronchitis and asthma and in removal of the catarrhal matter and phlegm from the bronchial tube. It also reduces the chances of ulcers and removes excess cough from lungs and nasal passages.

Known as turmeric, it’s phytochemical component Curcumin has a wide spectrum therapeutic properties and a remarkable range of protective effects in various diseases. Several experimental animal models have tested curcumin on lung fibrosis and these studies demonstrate that curcumin attenuates lung injury and fibrosis caused by radiation, chemotherapeutic drugs, and toxicants. The pharmacological and animal studies also supports the notion that curcumin plays a protective role in chronic obstructive pulmonary disease, acute lung injury, acute respiratory distress syndrome, and allergic asthma, its therapeutic action being on the prevention or modulation of inflammation and oxidative stress.

Zagro’s Phyrorespi is a combination of the above listed polyherbal-based feed supplement product which support healthy respiratory system to facilitate optimum growth and production performance. The phyto active compounds help stimulate and optimise the function of the respiratory system.

Phyrorespi helps to strengthen the protective mechanism and functioning of respiratory system along with the improvement in immunological profile and facilitates normal breathing. It soothes the respiratory tract and keeps the system clean and optimally functional. The microorganisms that permeated along with dust into the air sacs are then easily thrown out thus, pathogenic infection is prevented.Phyrorespi also keeps the lungs clear and thus prevents upper respiratory tract discomforts and possibilities of secondary infections. 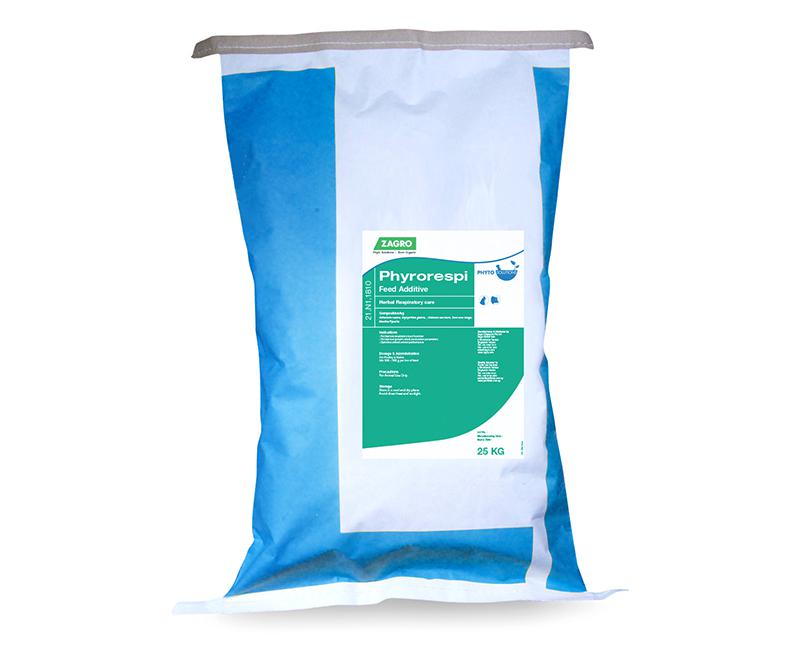