Parasitic gastroenteritis (PGE), caused by infection of the gut with parasitic nematodes, is one of the most important diseases for both sheep and cattle farmers from both a financial and a welfare perspective. Gut roundworm infections (gastrointestinal nematodes) are a major impediment to cattle and sheep livestock production efficiency. Current control is achieved by routine dosing of susceptible stock with drugs (anthelmintics) but this is threatened by the development and spread of drug resistant parasites and Liver fluke is caused by a parasite Fasciloa hepatica its is an internal parasite of sheep and cattle.It can cause severe production losses and death. Damage may initially be caused by the immature stages of the fluke migrating through the animal’s liver (“acute” liver fluke disease). These immatures develop into adults which suck blood from the lining of the bile ducts, causing significant blood loss and liver damage in heavy infestations (“chronic” liver fluke disease). In sheep, the “acute” disease is seen as sudden weakness and death. The “chronic” form is more common, in which case sheep lose condition, develop a soft fluid swelling under the jaw (“bottle jaw”), become weak and may die. Closer examination will reveal pale eye linings and gums caused by the loss of blood.In cattle, the “chronic” disease is more common and is similar to that seen in sheep. Affected cattle have rough coats which become pale in breeds, such as Herefords, that have red coats. Weight loss, poor milk production, “bottle jaw”, anaemia and chronic diarrhoea are all symptoms of chronic fluke infestation. The “acute” form has been seen in dairy calves exposed to massive numbers of immature fluke. Fluke impacts on milk production, growth rate of beef and lambs, fertility in ewes and, ultimately, the economic viability of production units. 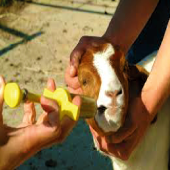 Gastro-intestinal roundworms, lungworm and liver fluke are all considered to be economically important parasites to control. In an attempt to manage anthelmintic resistance, double combination drenches have become an important tool and the use of a combination drench is usually more successful.

For manage above problems Zagro freshly developed product called VermiShield which contains synergistic effect of two synthetic antihelmentics design to prevent and treat Parasitic worms and liver flukes in ruminants. It is a medicated oral drench of Triclabendazole and Levamisole HCL combination. Triclabendazole belongs to benzimidazole has wide range activity against all stages of liver-fluke .Its almost completely oxidised to sulfoxide and sulfone. The sulfoxide metabolite are anthelmintically active. Levamisole HCL is belongs to imidazothiazole active against stomach, gut and lung worms. Its interferes with the parasite neuromuscular transmission causing muscular paralysis and rapid expulsion.