Feed is the major expenditure in production cost which comprises 60-70%. It is one of the key factors we look into to ensure farms sustainability and profitability. Due to this, ensuring the quality of feed ingredients is a must. Physical, chemical and microbial properties of these ingredients are carefully evaluated. As bulk of the feed ingredients used is grains, there is also more focus into these ingredients. Nutrient content of these grains are periodically tested to ensure animals growth. However, nutrient content is not the only thing we need to look into. In achieving productivity, we also need to look into feed safety. One of the feed safety issues that have been recurring in the industry is mycotoxin contamination. Due to their intrinsic properties, these grains are very susceptible to microbial contamination. Hence, a rational approach in controlling feed mycotoxin is a great challenge in order to satisfy feed safety.

Mycotoxins in feed and its effect to Animals

Mycotoxins are metabolic products or by-products of fungi. Grain feed ingredients may be contaminated with mycotoxins even before harvest of the plant, during post-harvest handling and storage, and throughout processing into animal-feed products. According to FAO (Food and Agriculture Organization), 25% of the world’s crop harvests are contaminated with mycotoxins. Mycotoxins growth is also favored by certain environmental and storage conditions such as temperature of 40-90°F, more than 70% relative humidity and grain moisture higher than 14%.

There are over 300 types of mycotoxins, but only few are yet studied and regarded significant to animal health. These are Aflatoxin, Vomitoxin, Zearalenone, Fumonisin, and Ochratoxin. Accumulation of mycotoxins in the animal’s body implies a major threat to the animal’s health. Animal performance is negatively affected by mycotoxins. This includes reduced feed intake, poor feed efficiency and weight gain, respiratory problems, decrease reproductive performance, liver, kidney and other organ damage and increase mortality rate. Mycotoxin effects on animals vary depending on certain factors such as species, breed, age and sex of the animal, nutritional and health status, and presence and exposure to other mycotoxins.

In accordance to feed safety and farm productivity, measures are taken out to control mycotoxins and prevent mycotoxicoses. Practical and effective methods are designed to detoxify feed ingredients containing mycotoxins. Different approaches, physical, chemical or biological methods are carried out to eliminate toxins. Physical approaches include cleaning, washing, segregation, thermal inactivation and irradiation. Chemical approach uses chemical agents to detoxify the ingredient, only, most agents also affects the nutritive content of the feedstuff. Biological method on the other hand, uses adsorbent material which binds the mycotoxins and is the most commonly used and studied approach.

Adsorption or binding of mycotoxins using toxinbinders in feed is the best method adopted so far. This uses substances which has capacity to bind mycotoxins in the gastrointestinal tract of the animals. Toxinbinders includes aluminosilicates (clay, bentonite, montmorillonite, zeolite, phyllosilicates, etc.), activated carbon, complex indigestible carbohydrates (cellulose, polysaccharides in the cell walls of yeast and bacteria such as glucomannans, peptidoglycans, and others), and synthetic polymers such as cholestryamine and polyvinylpyrrolidone and derivatives.

Aluminosilicates are the most common toxinbinders available in the market and Hydrated Sodium Calcium Aluminosilicates (HSCAS) has been the most extensively studied among all of them. HSCAS like other bentonite clays resulted from the decomposition of volcanic ash and consists primarily of phyllosilicate minerals belonging to smectite group. Bentonites have high aflatoxin adsorption, capacity and affinity (Vekiru et al., 2007) and could stop up to 90% of the fumonisins present in a complex medium, eg., gastrointestinal fluid (Richard and Payne, 2003). About 70% of the cases, the smectite is montmorillonite. HSCAS which refers to a specific calcium montmorillonite is known as the most effective enterosorbent of aflatoxins. Aflatoxins, known as the most notorious mycotoxin, have β-keto-lactone or bilactone system which forms a stable HSCAS-aflatoxin complex, thus, explains the effectiveness of chemisorption of mycotoxin to HSCAS. Corn, the major grain used in most feeds, is most likely to have perennial contamination with aflatoxins. Since aflatoxin has shown to be carcinogenic, FDA set action levels for aflatoxins for all foods including animal feeds and even corn intended for feeds (Figure 1). HSCAS has been shown in many feeding trials that it has protective effects against aflatoxins in several animals.

A reliable toxinbinder of choice

Zagribind, is a tri-layered hydrous aluminosilicate with extremely consistent levels of sodium and calcium (HSCAS). It undergoes stringent manufacturing processes designed to optimize the cation exchange capacity of the material. The purification process removes the non-clay portion that interferes with mycotoxins adsorption. This means that more surface and more charges are expose for mycotoxin adsorption, thereby preventing mycotoxins absorption by the gastrointestinal tract of many species of livestock.

On a trial conducted in 2012 at Pharmacovigilance Laboratory for Animal Feed and Food Safety (PLAFFS);  Zagribind is used at 0.2% dose and the level of mycotoxins used was the following: Aflatoxin B1 (50ppb), Ochratoxin (50 ppb), Zearalenone (500ppb), Vomitoxin (500ppb), Fumonisin (1ppm), T2 toxins (100ppb). The results of this trial (Figure 2), clearly show that Zagribind can significantly bind most of the mycotoxins present in gastrointestinal tract of animals. 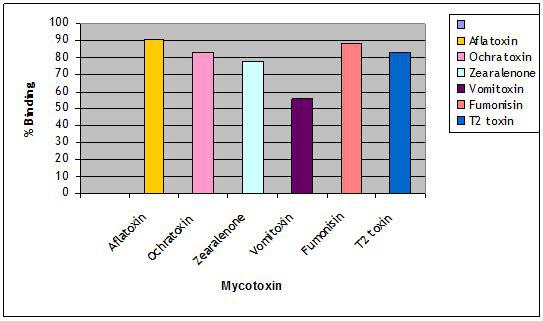 In a pig trial in Virginia Polytechnic Institute (Figure 3), Zagribind also shows positive effects on aflatoxin contaminated corn. This trial shows that even at very high Aflatoxin content of corn, Zagribind can effectively bind the toxins and diminish its negative effects to the animals’ performance.

Figure 3. Effects of Zagribind on aflatoxin contamination in pigs

With all the risks of mycotoxins, from its effects to animal health to farm productivity, using a cost-effective approach is a great challenge but is possible to achieve. Physical and chemical approach may be rational, but it’s not cost effective and can be hard to manage on a big scale. Biological approach by using mycotoxin binders is the most cost-effective method so far, only, choosing a reliable one will be the challenge. The binding capacity of the adsorbent must always be taken into consideration. Always remember that not all clays are the same, and so that not all HSCAS are the same. With Zagribind, a purified HSCAS with consistent physical and chemical quality, maximum mycotoxin binding capacity is achieved for optimum farm productivity and feed safety.