Mycotoxins are fungal metabolites that can reduce the performance and alter the metabolism of livestock and poultry. Mycotoxins can be produced by fungi especially those of the genus; Aspergillus, Penicillum and Fusarium. Mycotoxin contamination can occur in all agricultural commodities in the field and/or during storage.European Union has regulated five mycotoxins in animal feed which are aflatoxins (AFs), fumonisins (FBs), ochratoxins (OTs), deoxynivalenol (DON), and zearalenone (ZEN).Animals are mainly exposed to mycotoxins via ingestion of contaminated feed. This may result in reduced animal performance with negative health implications, leading to increased incidence of disesea, reduced production efficiency with associated huge economic loss to farmers. Dead may occur in cases of high acute mycotoxins intoxication.The combination of different Mycotoxins is more harmful to animals than a huge quantity of single Mycotoxin due to their synergistic action. The synergistic effects of different mycotoxins result in more severe toxicosis in animals. Multi mycotoxins are likely to arise for at least three different reasons; (i) most fungi are able to simultaneously produce a number of mycotoxins, (ii) commodities can be contaminated by several fungi, and (iii) completed feed is made from various commodities.

The risk of multiple mycotoxinsâ€™ synergistic effects can be reduced by good feed managing practice such as incorporating multi mycotoxin binder in animal diet. To help this cause, Zagro recently launched a useful multi mycotoxins binder, Zagrisorb. Zagrisorb is a combination of inorganic and organic binder suitable for binding a wide range of mycotoxins present in animal feeds. The inorganic binder comes from purified Hydrated Sodium Calcium aluminosilicates that can adsorb greater amount of positive charge mycotoxins such as aflatoxins as well as significant level of other mycotoxins. On the other hand, organic binder extracted from the yeast cell wall can also enhance more binding to other mycotoxins including Zearalenone, T2 toxins, Fumonisins and Vomitoxins as well as it can helps in improving animal performance and Gut health. 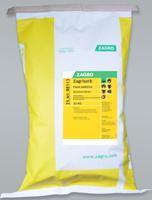 ZAGRISORB WILL BE THE EXCELLENT LOCK AGAINST MULTI MYCOTOXINS