Energy is a major cost component in diets for high-performing Farm animals. Due to their high energy density, fats and oils are important energy sources in feed formulation. Improving the energy efficiency of these raw materials is of great interest from an economical point of view. Dietary Bio surfactant of feed emulsifier can be used in animal feed as an important tool to improve fat digestibility, resulting in better energy ultilization of diets

The terms fat and oil (or lipid) refer to triglycerides of several profiles of fatty acids. Fatty acids that are not bound to other organic components as glycerol are the so-called free fatty acids. Lipids constitute the main energy source for animals and they have the highest caloric value among all the nutrients. The amount of energy that an animal can obtain from the dietary fat depends on the digestibility of the fat. A higher digestibility will result in more available energy. The digestibility of fat by animals is related to different characteristics of the fat and the absolute amount of fat added to the diet. Animal factors such as age also influence the digestibility.

Young animals have a low level of natural lipase production and a low rate of bile salt production and therefore have a limited fat digestion. Fat digestion can be enhanced by adding Feed surfactant to the diet. Fat digestion occurs in a few steps. Initially, the large fat globules are emulsified in the watery environment of the gut aided by peristaltic movement. Normally fat and water do not mix and therefore bile salts assist in this mixing process as a natural emulsifier. Smaller fat droplets are formed to increase the contact surface for the enzyme lipase. This enzyme is produced by the pancreas and breaks down the fat

Fats and oils are esters of three fatty acids and glycerol. The fatty acids are released (hydrolysed) from the glycerol by lipase. This results in two fatty acids and one monoglyceride. The next step is the formation of micelles. Micelles are water soluble aggregates of lipid molecules containing both polar and non-polar groups. The molecules are grouped in the micelles in such a way that the polar groups are on the outside in contact with the aqueous phase, while non-polar parts from the inner lipid core of the micelles. Bile salts and monoglycerides aid as emulsifiers in the formation of micelles. When the micelles come into contact with the micro villous membrane they are disrupted and the fatty acids can be absorbed by the lipophilic cell membrane.

Feed supplement of emulsifiers are used in animal nutrition for improving performance, digestibility of the nutrients, especially fats, and include soy-lecithin, milk derived casein, lysophatidylcholine or lysolecithin (lecithin), bile salt, glycerol polyethylene glycol ricinoleate (E 484), and sodium stearoyl-2-lactylate (SSL) etc. The efficacy of emulsifying agents can be used with different vegetable oils and various levels of metabolisable energy (ME).

A nutritional Bio surfactant can be used to improve fat digestibility and thus improve the energy efficiency in animal diets. Due to its high energy density, fats and oils are important energy sources in feed formulation, but these raw materials also have a high cost. Improving the energy efficiency is of high interest from an economical point of view. This will result in a lower feed cost and contribute to a more economical and sustainable animal production.

Soy lecithin is a natural sourced, consistent, superior feed ingredient that is an excellent source of dietary phospholipids. The benefits of lecithin are especially pronounced in the diets of young animals and aquatic species. The underdeveloped digestive tracts of these young creatures are very limited in their ability to synthesize adequate quantities of phospholipids. Supplementing with soy lecithin as a source of phospholipids, choline and inositol enhances growth and survival.

In feed it can be used as a natural choline source and improves digestibility of the total feed.The usage of lecithin as a feed additive promotes enriched health as well as has economic advantages. Studies have shown that use of lecithin in animal diet promotes growth rate, skin quality and feed utilization. Lecithin is easily absorbed, and functions in part as an emulsifying agent to promote better absorption of fatty materials and other food elements. It is an excellent emulsifying agent which improves food utilization and enters into the structure of living cells.

Lysolecithin is produced using a patented enzymatic process where soy lecithin is converted into lysophospholipids (LPLs). LPLs have increased hydrophilicity and are more fluid, which improves their capacity to support formation of oil-in-water emulsions. Lysolecithins have proven to be a cost effective solution to improve fat emulsification and consequently fat digestion and nutrient absorption in monogastric animals and aquacultures.

Zagro’s research team developed and introduced two types of Feed bio surfactant products to various requirements to enhance fat and oil efficiency in the animal nutrition. The products are called LIPOZIN AND LIPOZAG.

LIPOZIN is a NON GMO source of soy lecithin powder and highly bio available phospholipids to poultry, pig, shrimps, and fishes. It has an interactive role in the intestinal absorption of Lipid, which helps improve the growth and survival of monogastric and aquaculture species.

LIPOZAG is a lysolecithin-based functional feed additive which contains high content of lysophospholipids that increase nutritional values of feed and improve the fat and oil digestibility. This product act as a bio surfactant to form small micelles of nutrients which more rapidly absorbed in GIT and improve overall animals performance. 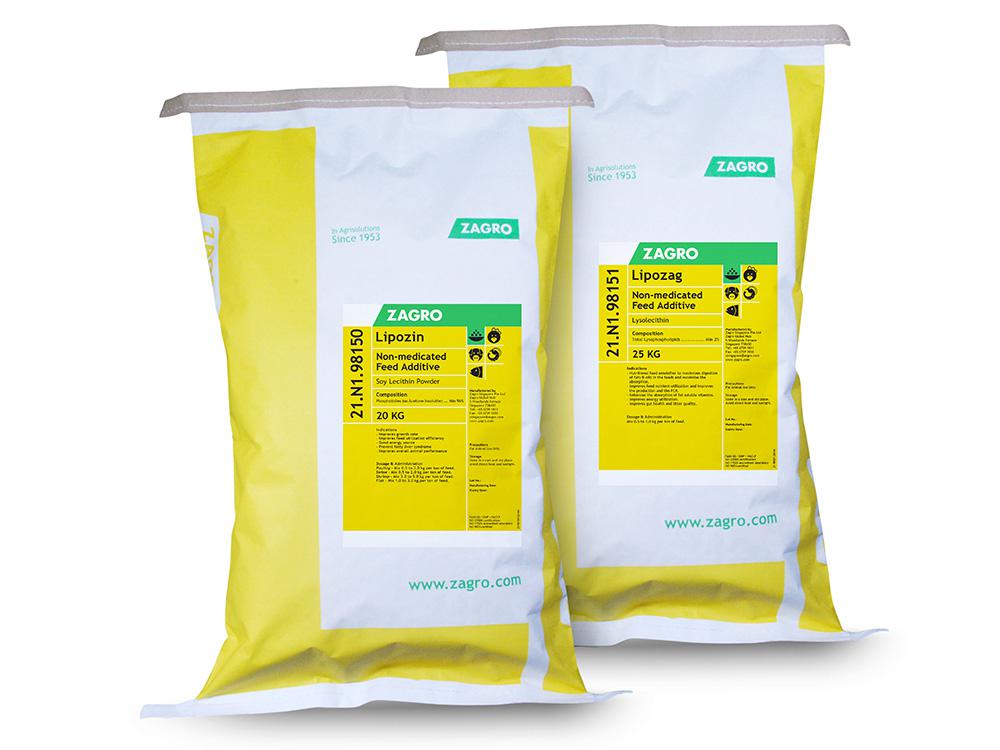