Enhance the Growth Performance of Animals through Improved Nutrient Utilization

Phosphorus (P) is primarily stored in the form of phytate in plant seeds, thus being poorly available for monogastric livestock, such as pigs and poultry. As phytate is a polyanionic molecule, it has the capacity to chelate positively charged cations, especially calcium, iron and zinc. Furthermore, it probably compromises the utilization of other dietary nutrients, including protein, starch and lipids. Reduced efficiency of utilization implies both higher levels of supplementation and increased discharge of the undigested nutrients to the environment.

During the last decade, phytase has been used by animal feed industries to catalyse the stepwise hydrolysis of phytate. In animal nutrition, there are actually four possible sources of this enzyme available for the animals: endogenous mucosal phytase, gut microfloral phytase, plant phytase and exogenous microbial phytase. The endogenous mucosal phytase in monogastric organisms appears incapable of hydrolysing sufficient amounts of phytate-bound P, thus, supplementation of exogenous microbial phytase in diets is a common method to increase phosphorus availability. Besides the supplementation of microbial phytase, processing techniques are also alternative approaches to reduce phytate contents. These techniques such as germination, soaking and fermentation enable activation of naturally occurring plant phytase among others.

Phytase is an enzyme that makes the phosphorus from phytin available for animal digestion. Up to now, phytase has been mainly used as a dietary supplement for swine and poultry. As phytase is increasingly used in animal feeds, science and technology related to this enzyme are rapidly evolved. Several detailed reviews have been published in recent year’s. The benefits of phytase on reducing the use of expensive inorganic phosphorus in animal diets and the environment pollution from excessive manure phosphorus runoff had been highlighted. Grains used for animal feed consist 60–75% of phosphorus in an organically bound form known as phytate, which cannot be utilized by monogastric animals. Thus, the majority of this phytin phosphorus will pass directly through the digestive track of the animals and winds up in manure and liquid effluent. It has been shown that adding 500 to 1000 units of phytase to monogastric animal feeds can replace approximately 1 gram inorganic phosphorus supplementation and reduce phosphorus in the manure by about 30–50%. The rate of phytase inclusion in animal diets is depending on both the desired degree of phytin reduction and economical considerations.  Phytase produced by filamentous fungi on selected feed ingredients contains also accessory enzymes, fungal protein and organic acids that increase feed digestibility and access to phytin in plant cells . The product can be directly mixed in feed rations as a value-added supplement, further reducing the cost for use in animal feed.

With Zagro’s aim to provide complete agrisolution, improving feed efficiency being part of it, Phytazag was scientifically designed. Phytazag is a phytase enzyme that improves the availability of phosphorous in poultry and swine feeds by releasing the phytin-bound phosphorous in feed ingredients of plant origin. Phyatazag also enhance the growth performance of animals thru improved nutrient utilization and bioavailability of macro and micro minerals in animal and also helps to reduce the P pollution in the animal environment. Recently, Zagro launched Phytazag 500 HS –   a thermostable phytase enzyme produced using a strain of Aspergillus niger. It is a naturally heat stable phytase which enables it to survive feed pelleting. 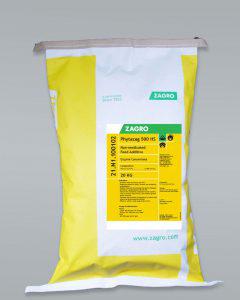