Improper management, stress, stage of lactation and poor diet are among the causes of reduced milk production in cows, besides diseases.

The dairy cow is consuming more feeds, but they may not be well-balanced to sustain milk production as well as their growth. For optimal milk production, the feed ration must contain sufficient energy, protein, crude fibre, vitamins and minerals.

As feed intake is not proportional with milk production requirements, the cow possesses the unique ability to utilize her body reserves for milk production. Thus, lactating cow usually losses weight at the beginning of lactation as a result of withdrawal of her body reserves until a point when she reaches her peak. Under good feeding conditions, cows can even lose as much as 66kg in body mass during the first three months of lactation.

Balanced diet plus the guiding principle for Calcium and Phosphorus are essential in the physiological condition of the animal, i.e. , pregnancy, lactation or growth in young animals. As observed by many researchers, it is a known fact that most of the available feeds and fodders are deficient in Calcium and Phosphorus thus, the need for additional supplementation.

The supplementation of Calcium (Ca) assumes importance for productivity and fertility. Requirement of calcium increases slowly during pregnancy and in high yielding cows; it increases further by 33 % or more with the onset of lactation.

Calcium deficiency is directly not responsible to sub-fertility or fertility but disturbed ratio of calcium and phosphorous (P) has a blocking action on pituitary gland and consequently on ovarian action (Morrow, 1980). Higher ratio of Ca and P has been suggested to be associated with infertility in bovines (Kumar et al. 1992). Non-availability of calcium in the diet results in calcium deficiency which is accentuated at the time of parturition results in clinical hypocalcaemia.

Chronic deficiency, however, leads to a sub clinical syndrome characterized by production and fertility underperformances (Duffield et al., 2005). There appears to be unanimity in the criteria that if more than 50% of the animals in a herd show blood calcium level lower than 8 mg/dl, the herd can be classified as subclinical. Thus hypocalcaemia is a major field problem in dairy animals.

On the other hand, moderate Phosphorous (P) deficiency leads to repeat breeding and low conception rates whereas severe deficiency may delay onset of puberty and post partum estrous because of inactive ovaries (Paugh et al, 1985).

Phosphorus is directly related with reproduction and phosphorus supplementation has direct effect on release of gonadotrophins which ultimately induces cyclicity, oestrus and conception during post partum stage. Pasture- based diets are deficient in phosphorus, whereas animal fed on grains have adequate P in their diet.

In dairy cattle, Phosphorus (P) plays a vital role in almost all metabolic reactions and energy transfers within the body. Phosphorus must be provided in adequate amounts for optimal growth rates, feed efficiency, milk production, and reproductive efficiency.

Key vitamins D3 and B12 play an important role in Ca and P metabolism.  Therefore, sufficiency of these vitamins correlates with the need of the said minerals as well. In addition to these nutrients, Lysine and methionine are the most limiting amino acids in dairy cows. Supplementation of these amino acids significantly increases the Methionine and Lysine concentration in arterial plasma, increasing milk production, milk protein yield, and Nitrogen utilization efficiency.

To cope with the Dairy industry, Zagro developed a product called ZAGCAL ORAL. This contains bio-available nutrient of Calcium, Phosphorus, Key Vitamins D3 and B12, limiting amino acids and carbohydrates. Zagcal is designed to improve milk yield and FAT Percentage in Milk for dairy cow and buffalo. It is an ideal supplement for dairy cow feeding to fulfill their nutrient requirement.  Zagcal is also an efficient oral supplement for better growth and performance in cattle. 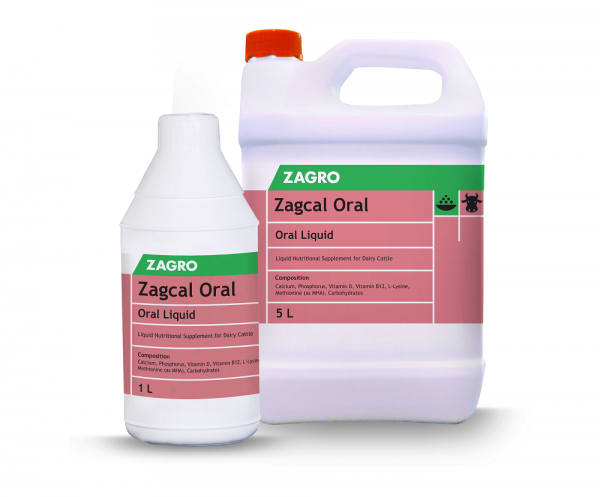 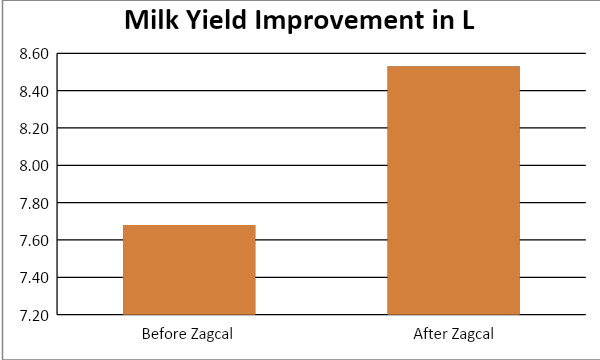 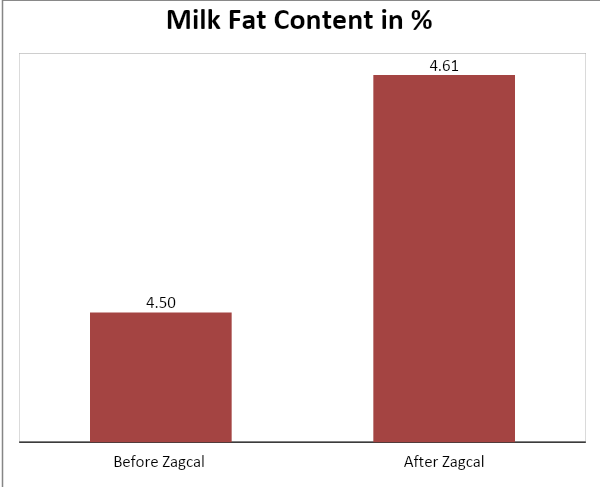